Letter from Sister Martine and the Council General 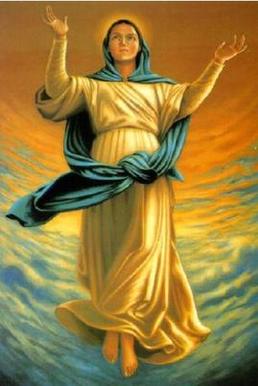 “Now a great sign appeared in heaven: a woman, robed
with the sun, standing on the moon and on her head a
crown of twelve stars. She was pregnant, and in labour,
crying aloud in the pangs of childbirth. Then a second sign appeared in the sky: there was a huge red dragon with seven heads and ten horns, and each of the seven heads
crowned with a coronet. 4 Its tail swept a third of the stars from the sky and hurled them to the ground, and the dragon stopped in front of the woman as she was at the point of giving birth, so that it could eat the child as soon as it was born. (Ap 11, 19a; 12, 1-6a.10ab)

In the wake of our 2012 Chapter which ended last July 30, we are inspired to look at Our Lady of the Assumption, represented by the Woman of the Apocalypse, a woman deeply human, completely transfigured, and divinely adorned. She is clothed with the sun, with the moon under her feet and
on her head, a crown of stars. She is the human being completely in harmony with creation and with God. But the dragon is present as well, eternally responsible of the age-old “tsunamis” of evil, of violence in all its forms and of death itself.

While evoking the terrible struggle for Life, the texts of this Solemnity also meet us in our desire to revitalize our contemplative identity and to live communion. They invite us to place ourselves in a friendly and respectful manner on our Planet - Earth, taking care of it and being grateful for all the
good gifts that fill us for generations.

The liturgy for this feast of the Assumption is a real invitation to lend our ears to the voice of our Lord, to allow ourselves to be seized by Him and to be led into his Paschal dance. He listens to us and hears our stifled cries. He takes care of our lives, always ready to draw us from chaos, make us new
creatures and puts us at the place He prepared for each one of us. For Him, it is always the favourable time! Yes, 'Salvation and power and empire for ever have been won by our God and all authority for his Christ”.

First among the saved, the Virgin Mary is the collaborator par excellence of her divine Son in his work of salvation. She carried in her womb eternal Wisdom, the Saviour of the world. She precedes us on the paths of communion, service and the total gift of self. Mary knew how to welcome, in faith, the Word of the Lord and then put herself in movement. From her we can learn “the true attention of the heart” that will enable us to love truly and to announce the mercy of the Lord, promised not only to humanity but to all of creation.

May she obtain for us the grace to run, like her, simple and alert, on the pathways of the world, witnessing to Hope!

Happy feast of the Assumption… grateful for Lord’s gifts through the Chapter General… Opening to the new times for our beautiful Assumption throughout the world!

With our prayer and our fraternal affection,

Sister Martine and the Council General